Explainer Video Strategy behind the scenes

Behind The Scenes: The Explainer Video Soundtrack

Moving on with the explainer video production process, today it’s time to focus on the soundtrack. The music itself has a strong power to trigger different emotions in your target audience.
So, if you find the right way to reach them with a compelling message and  suitable music, they will certainly feel motivated to know more about your product and your brand. Let's review how important this stage can be in the video production process!

THE ROLE OF SOUNDTRACK IN EXPLAINER VIDEOS

The soundtrack (which includes both the music and the sound effects) will set the tone and pace of your explainer video. Moreover, it's a key aspect to consider, as it has the power to reinforce the message you want to deliver. And also, as we've mentioned, it has the ability to set up different emotions in your target audience. So, if you choose the right soundtrack for your video, you will certainly make it even more catchy, engaging and -ultimately- effective.

Sound effects can also add personality, humanity and humor to characters, creating a more robust narrative and constructing a kind of custom universe.

HOW WE DO IT

At Yum Yum Videos, we believe that the soundtrack is a key detail to bear in mind when developing a custom video. We focus on giving the best quality to every step of the production process, and the soundtrack is no exception: we are convinced that taking care of every single detail will lead to the best results.

We work with a wide exclusive catalogue that gives us the chance to fully customize the video according to our client's needs: in every soundtrack election, it's vital to consider the type of video that is being developed, the message that needs to be delivered, the voice-over that goes with the story, and the design of the characters.

Check out this example. The soundtrack goes perfectly with the voice-over so as not to overshadow it and it makes the message clear and understandable:

This is another good example of how sound effects can work well with the message. This video has specifically been selected by Hubspot as one of the best explainer videos on the web:

When selecting the soundtrack, remember that it's vital to define the role that the music will play in the video. If you need to pass on many technical details, for instance, it may not be the best idea to overwhelm the viewer with too many sound effects or with intense music that could divert attention of some difficult concept. In every case, you have to help them stay focused and not be distracted.

When picking out the soundtrack, it´s important that the video production company you work with bears in mind the demographics of the target audience you're speaking to. Of course, the product and the message, as we've mentioned, play a key role too, but it's also essential that the soundtrack resonates with the people that will watch your video. Again, the choice of the music and sound effects is essential to create a compelling and effective message.

Now, would you like to know how the music and the sound effects fit in the video production process? Download this free infographic and, in a simple step-by-step way, get all the information you need!

We also recommend that you take a look at our previous “Behind The Scenes” articles about the scriptwriting process, how to make a storyboard, the key role of style frames and how to make the most out of the voice-over, so that you can have a clear idea on the whole process. 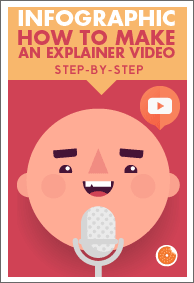 4 Great Ways To Explain What Your Mobile App Does